Is there a link between physics/natural phenomena and our thoughts and emotions?

Planck’s theories in quantum mechanics, shed an initial light on the relation between consciousness and science, spirituality and our existence, it explains how observation change in matter, and thus our thoughts, how ideas attract similar events, quantum metaphysics explains  what is known nowadays as the widespread idea of the “Law of Attraction”; meaning whenever someone thinks of something, they attract it in their experience.[1]

In fluid dynamics: a vortex, is a region in fluid in which the flow revolves around an axis line, which may be straight or curved. Vortices usually form in stirred mediums as fluids. Meanwhile, in psychic writings and new self-development studies, sometimes they refer to a vortex, as the point of letting go, similar to salvation, it’s a vibrational state of being that starts all positive motion forward, “It’s pure positive energy… It’s the place where all dreams and wishes and hopes are held until we find vibrational alignment with them.” [2]

Meanwhile, there are 40 kinds of basil, Ocimum tenuiflorum, commonly known as holy basil or tulsi, is an aromatic perennial plant in the family Lamiaceae . Holy Basil is cultivated for religious and traditional medicine purposes, and for its essential oil. It is widely used as a herbal tea, commonly in Ayurveda. There are many rituals and beliefs associated with basil, it has a religious significance in the Greek Orthodox Church , where it is used to sprinkle holy water. In India, basil is placed in the mouth of the dying to ensure they reach God. The ancient Egyptiansand ancient Greeks believed basil would open the gates of heaven for a person passing on. Sweet basil or Basil, in general, was also mentioned in the Quran as one of the plants of heaven.

This exhibition is a journey through quantum physics, self-development, physic-visions, towards the vortex of bless, or vortices of holy basil.

I was happy to hear about the initial release of the conference proceedings publication “WAC: International Encounters, WALKING PRACTICES/WALKING ART/WALKING BODIES” including my article ” Walking in Modern and Contemporary Egyptian Art”. The Conference was arranged by The Department of Fine and Applied Arts of the University of Western Macedonia in Prespes, Greece in 2019. You can buy the whole book from this link https://icowaf.eetf.uowm.gr/paper…/conference-proceedings/or email me for a copy of my article.

Participating in Locative Media for Earthlings in a Changing World

Last Month I had the pleasure to Participate in a pilot online summer school project by King’s college, the program experimented on how locative media could be used to understand issues of (im)mobility, climate change and COVID-19 pandemic, it was an amazing journey with exceptional company, daily meetings, online lectures and guest speakers, curated and organized by Mike Duggan, Vermeire Geert and Fred Adam.

I participated with the yellow team in the Mask/ear(t)h/Raid using the CGeomap to explore the relation between Masks and (im)mobility during COVID-19, my personal project projected on (im)mobility, “The City/ The House” as a family member  in my house had COVID-19 and later on I developed it to, the project was after Mahmoud Darwish’s  “Resala min Al-Manfa” ” A Letter from Exile” where the locative media on the CGeomap invites the walker to listen to a poem that metaphors an infected house.

Comments Off on Participating in Locative Media for Earthlings in a Changing World | posted in Egyptian Contemporary Art, locative media art Egypt, Walking and Art

The dialogue was published in African Arts Journal, MIT Press and free on African Arts and can be found on the following link: http://www.mitpressjournals.org/doi/abs/10.1162/AFAR_a_00341 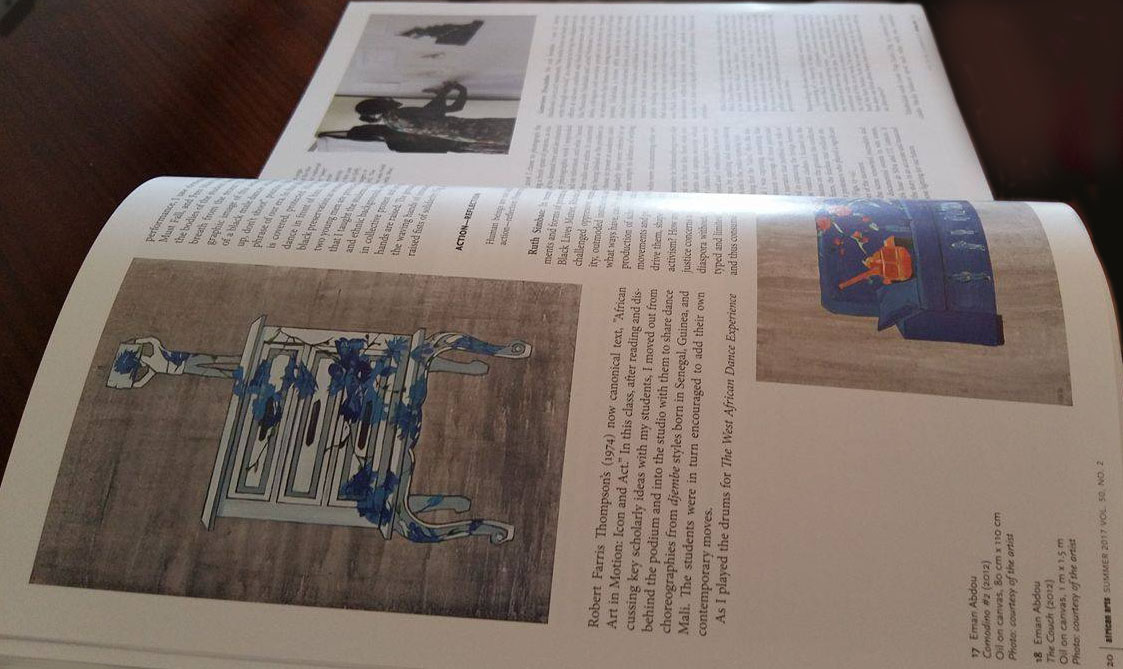 It was a great participating in BECAMI international workshop at Sheffield University, and finally get the chance to try the Paternostar!! following is the link of the abstract of my talk. 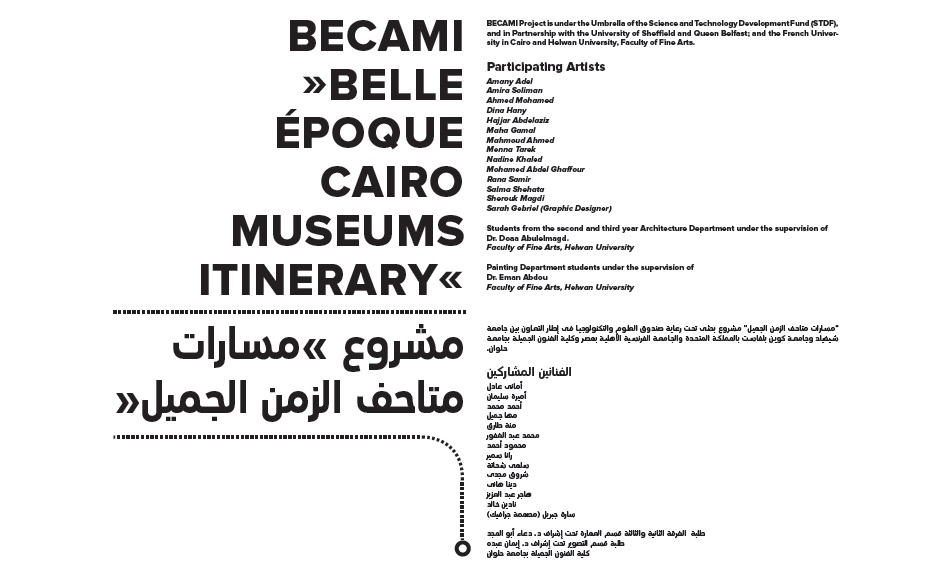 “Belle Epoque” Cairo Museum Itinerary (BECAMI) is under the umbrella of Science & Technology Development Fund in Egypt (STDF), the Arts and Humanities Research Council (AHRC), and in partnership with The University of Sheffield and Queen’s University Belfast; the French University in Cairo UFE and Helwan University, Faculty of Fine Arts.

“The device of installation can also be transformed into a theatre of memory and make the artist a collector, archivist or window-dresser, placing before the visitor’s eyes not so much a critical clash of heterogeneous elements as a set of testimonies about a shared history of the world.” Jacques Rancière, The Future of the Image.

BECAMI project aims to re-introduce the Cultural Heritage of the Liberal age (1922-1936), which represent an important part of the memory of the Egyptian nation as depositories of the history of iconic figures in politics, music and literature. Through the creation of physical and virtual itineraries linking a group of museums that were established in that timeframe, or created later in mansions dating back to the same epoch. The Museums of BECAMI includes; museums of iconic Egyptian singers in the Arab World (Umm Kulthum and Abdelwahab); museums of Literature and poetry pioneers (Taha Hussein and Ahmed Shawki); transport and communication museums (Cairo Railway and post); Political figures Museums (Prince Mohamed Ali and Saad Zaghloul) in addition to three thematic museums: The Agricultural, the Ethnographic and the Faculty of Fine Arts museums. Students of the both the Painting and Architecture department at the faculty of fine arts presents their experience through the itineraries.

We traced the itineraries created in the project with our lenses, and various questions rose during the visits, how can we re-imagine history? How does it affect our lives? Is it lost or can we re-construct our personal data of it? Can we change our past? By visually building new memories of it, by Attaching emotions, Building new shared codes? How can part of the present, creates a new memory of the past?  A fresh new one, and thus history can be re-experienced, opening the gates of our visions to aspiring experiences. Can we dust the past and charge it for tangible moments of awareness? In personal narratives, we re-visit history for learning, unresolved pain or nostalgia for happiness, as our vision expand with time, new understandings rise and we see the past differently.

Comments Off on Through the Itineraries | posted in Egyptian Contemporary Art 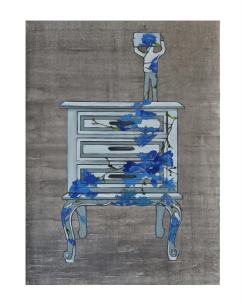 Comments Off on Comodino | posted in Egyptian Contemporary Art

“Fabulous residential and commercial project for accommodation in Egypt, built on 600 well-designed acres of beautifully landscaped area overlooking the blue lake, beautiful parks and green areas, fabulous villas and other residential units suiting all kinds of families.” For years Egyptian newspapers were invaded by a series of advertisement for countless compounds around Cairo and Alexandria, the advertisements promised the dream; lost a long time ago by Cairians, the fantasy of escaping the noise and traffic, But the advertisements offered the dream that stayed in the fictional land for most of the citizens creating a mixture of feelings of desires and nostalgia. And with the hope of a COMPOUNDIA for all in Egypt this project commenced with a series of fictional sketches and scenarios of my personal Compoundian flat.

Comments Off on COMPOUNDIA, 2015 | posted in Egyptian Contemporary Art

In June 2015 I worked with painting and Architecture students in a workshop sponsored by the UN-Habitat and The Ministry of state for Urban Renewable and Informal Settlement, the workshop was divided into three sections, Dr. Doa Abulmagd gave a session about the informal settlements and I introduced social practice art and the concept of the workshop with intensive activities to the students, followed by a session about design with Dr. Rania el Helw. The workshop was a great success and the students work was impressive, the audience were very supportive at the forum and at the Darb el Ahmar Area, The workshop is an introductory stage to work on social practice art.

Artists envision the world differently; the Workshop aims to facilitate collaboration between Painting, Architecture, urban Planning and social practice to reach new innovative visual solutions. Through the workshop students are introduced to the fundamentals of urban planning and social practice art, and are guided through site visits, interviews, sketching and visual research. Students in the second and third year of the Painting department present an art piece that projects a new reality or even a fictious one to the Darb El-Ahmar area. 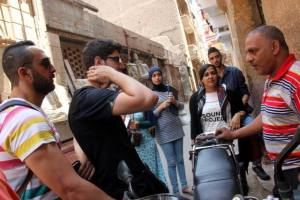 An ongoing project started at 2010, Compoundia, I created the term then, and the art works are evolving.